Tired of playing free demos with fake money? Find safe and trusted online casinos where to play with real money for a chance to win up to 9797x your bet. Sign up and claim our latest welcome bonuses.

FIRE IN THE HOLE

Warrior Graveyard is a six-reel, 25-payline slot from Nolimit City. It revolves around undead warriors rising up from cemeteries.

This game features six reels and 25 paylines. You form wins when matching symbols appear in lines going from left to right.

The atmosphere takes you into a spooky cemetery at nighttime. The background shows an overgrown graveyard, full moon, dark sky, and gravestones.

Both sides of the reels have stone columns rising up to the top of the screen. They also feature arrows stuck in them from a battle that must have taken place beforehand.

Once you trigger the bonus, the background turns to an eerie red color with skulls dotting the landscape. The music tempo also kicks up a notch. 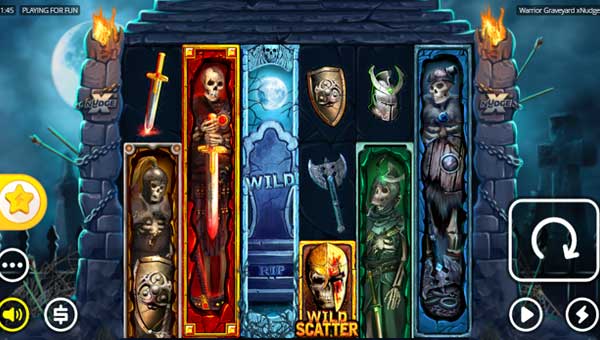 The red warrior pays the most among this bunch at 6x your stake for six symbols. You can win a maximum payout worth 9,797x your bet when featured are included.

However, operators can choose lower RTP at 94.14%. You should check the pay table to see which version you’re playing.

Volatility falls into the high range. The volatility is high due to the large 9,797x max payout along with several features.

Appearing on reels 2 through 5 only, xNudge Tombstone Wilds cover an entire reel (1x3). If a Tombstone Wild lands partially on the grid, then it nudges until it covers a whole reel.

These wilds also feature a win multiplier that increases +1 with each nudge. An xNudge Tombstone Wild that nudges two spaces, for example, will offer a 3x multiplier.

You can land these wild symbols in all four middle reels simultaneously. Therefore, you could conceivably get a 12x multiplier (3 x 4).

This feature happens when a premium symbol lands 3+ times either partially or fully on the grid. As with xNudge Tombstone Wilds, partial premium symbols see their multiplier increase +1 for every nudge.

These premium icons move to the leftmost reels when payouts are determined. You can also land Tombstone Wilds during Warrior Attack as well.

You trigger Graveyard Spins when landing 3+ scatters anywhere on the reels. You’ll receive 8, 10, or 12 free spins for three, four, or five scatter symbols.

Graveyard Spins feature a win multiplier that rises by +1 each time an xNudge Tombstone Wild gets nudged. This multiplier doesn’t reset after spins, which creates the chance of earning huge wins.

You unlock Death Spins when landing six scatters anywhere on the reels. You’ll receive 14 free spins in this bonus.

Like with Graveyard Spins, the win multiplier increases by +1 following each Tombstone Wild nudge. However, Death Spins also lock Tombstone Wilds into place for the entire bonus.

You can’t retrigger either Graveyard Spins or Death Spins. However, you do collect +1 free spin for every scatter that lands in either bonus.

As with many Nolimit City games, the Bonus Buy option is available in most jurisdictions. You can buy Graveyard Spins by spending 72x your stake. You can purchase Death Spins for 666x your bet.

Warrior Graveyard bears obvious similarities to its predecessor, Barbarian Fury. The latter provides a comparable atmosphere—only with living warriors instead of dead ones.

Barbarian Fury presents a similar five-reel, 25-line format along with the xNudge mechanic. It also provides a large top payout worth 8,785x your stake.

Vikings Go to Hell is another slot that reminds us of Warrior Graveyard. Developed by Yggdrasil Gaming, this five-reel, 25-line slot offers a similar look and pits Viking warriors against demons.

Vikings Go to Hell features more of an RPG-style of gaming than Warrior Graveyard. Nevertheless, it’s still comparable to the latter.

This game definitely lives up to Barbarian Fury. It provides an entertaining atmosphere, solid graphics, plenty of features, and big potential wins.

We do like the theme and appearance of Barbarian Fury slightly more. But Warrior Graveyard looks polished as a standalone slot.

You can look forward to more features with Warrior Graveyard than its predecessor. The xNudge mechanic, two sets of free spins, and Warrior Attack are in play.

In summary, if you like Barbarian Fury, then you should appreciate Warrior Graveyard. You’ll probably enjoy the sequel even if you’ve never played the original.

Warrior Graveyard was released on November 3 2020.

Can I play Warrior Graveyard for free?

- To be able to play Warrior Graveyard with real money you have to sign up for an account, preferably at one of our recommended online casinos. You can also claim a nice welcome bonus when you sign up as a new player.

- If you are lucky you can win really big amounts of up to 9797x your bet on this game. This means you can win 9797 EUR (when playing with real money) at most when betting 1 EUR.