Tired of playing free demos with fake money? Find safe and trusted online casinos where to play with real money for a chance to win up to 22222x your bet. Sign up and claim our latest welcome bonuses.

Beat the Beast: Griffin’s Gold is a 5-reel, 9-payline slot from Thunderkick. It serves as the culmination to the five-part Beat the Beast series. When Thunderkick launched this series, it promised huge wins and highly volatile play. The first four games have only mildly lived up to expectations.

However, Beat the Beast: Griffin’s Gold is the first slot of the bunch to truly deliver on the massive wins. We’ll discuss this game more below along with everything it has to offer.

Beat the Beast: Griffin’s Gold spreads 9 lines across five reels and three rows (5x3 grid). The gameplay is quite straightforward, with payouts forming only when matching symbols land in a payline.

The Griffin is a legendary creature that’s part lion and part eagle. It may not be quite as intimidating as Cerberus—one of Thunderkick’s other five beasts—but it’s nothing to be messed with.

While the Griffin isn’t necessarily tied to one ancient culture, this game places the Griffin in Ancient Greece. The background features a crumbling Greek sanctuary that’s complete with steps, broken columns, and Griffin statues.

You’ll also see blue skies and grassy hills in the distance. When you trigger the bonus game, the sanctuary restores itself amid an eerie nighttime sky.

We haven’t been overly inspired by some of the past Beat the Beast atmospheres. Thunderkick has definitely nailed the look and theme of Griffin’s Gold, though. 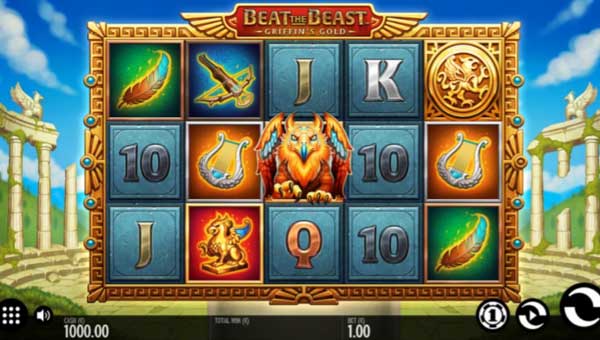 Low pays include royals (A through 10) carved into teal stone. You must land 3+ royals in a payline to win.

High-paying symbols include a crossbow, feather, lyre, and the Griffin itself. You only need 2+ of these symbols to score a payout.

The Griffin pays the most among regular symbols at 150x your stake for five. You can win a huge maximum payout worth 22,222x your stake through the bonus round.

A golden Griffin statue serves as both a wild symbol and scatter. When acting as a wild, the statue substitutes for other icons to help form wins.

We’ve built up the volatility and win potential of this slot quite a bit. However, you shouldn’t expect a feature-packed game.

Beat the Beast Griffin’s Gold only offers one bonus. However, this bonus can be quite lucrative thanks to its multipliers and roaming wilds. Here are the key points to look for when playing the bonus round.

As mentioned before, the golden Griffin statue is the scatter symbol. You trigger 10 free spins when landing 3+ statues on a given spin.

The bonus round features gold-and-red Griffin ornaments that act as roaming wilds. When these symbols land, they remain sticky for the duration of the bonus and move to an adjacent position after each spin. You’ll receive +1 free spin whenever a roaming wild helps create a win.

In addition to serving as wilds and delivering free spins, the roaming wilds also feature win multipliers. Every wild begins with a 1x multiplier and increases by 1x whenever it’s part of a win. Each multiplier can go as high as 5x.

Up to 3 roaming wilds can be on the reels during the bonus. Assuming 2+ roaming wilds appear in the same win, then their multipliers will multiply each other.

Ideally, you’ll get three Griffin ornaments with 5x multipliers in a win. This would multiply the payout by 125x (5x5x5).

Assuming you have amazing luck and apply this 125x multiplier to five Griffins (150x), then you’d enjoy a payout worth 18,750x your stake.

Nothing is inherently wrong with any of the previous Beat the Beast games. Everything from the series starter, Kraken’s Lair, to the fourth game, Quetzalcoatl's Trial, features solid design and fairly large wins.

However, Thunderkick hyped up this series to the same mythical proportions as the beasts represented. In this sense, Beat the Beast hasn’t really delivered…until now.

Beat the Beast: Griffin’s Gold is definitely what we envision regarding high volatility and massive wins.

The bonus is jampacked with goodies, including roaming wilds and win multipliers up to 125x. These modifiers help the bonus round deliver payouts worth up to 22,222x your bet.

The downside, though, is that Griffin’s Gold overloads the bonus round at the main game’s expense. No features exist in the base game—unless you want to count the wild symbol as a feature.

You may feel bored at times waiting for three Griffin statues to land on the reels. Once this does happen, though, you’re in for one heck of a ride. That said, we recommend Beat the Beast: Griffin’s Gold for the bonus and big potential wins.

Beat the Beast Griffins Gold was released on November 11 2020.

Can I play Beat the Beast Griffins Gold for free?

- To be able to play Beat the Beast Griffins Gold with real money you have to sign up for an account, preferably at one of our recommended online casinos. You can also claim a nice welcome bonus when you sign up as a new player.

- If you are lucky you can win really big amounts of up to 22222x your bet on this game. This means you can win 22222 EUR (when playing with real money) at most when betting 1 EUR.