Play Twisted Sister free demo from Playn Go. Try without cost, just for fun. The best way to learn the rules, features and how to play the game. Also read our unique Twisted Sister review with rating to get important information about Twisted Sister slot.

Tired of playing free demos with fake money? Find safe and trusted online casinos where to play with real money for a chance to win up to 4500x your bet. Sign up and claim our latest welcome bonuses.

Twisted Sister is a 6x6 grid slot from Play’n GO. It revolves around the legendary band of the same name. Twisted Sister became notorious for its edgy messages in hits like “We’re Not Gonna Take It” and “I Wanna Rock.”

This slot features a 6x6 grid with cluster pays. You form wins by landing 5+ matching symbols in clusters going horizontally and/or vertically.

Cascading reels cause symbols from winning combinations to disappear and new icons to take their places. This process continues until no more wins can form.

The background consists of amplifiers on both sides of the reels along with a large guitar on the left-side. A collection of bones enchase the 6x6 grid.

The look feels somewhat airy and neutral for a band that was as controversial as Twisted Sister. It feels like it could generically work for almost any band.

Of course, the music is the real draw to these types of slots. The Twisted Sister slot soundtrack includes I Wanna Rock and We’re Not Gonna Take It.

This song quantity doesn’t quite match the abundance featured in NetEnt’s Gun’s N’ Roses, for example, However, the selection is at least passable. 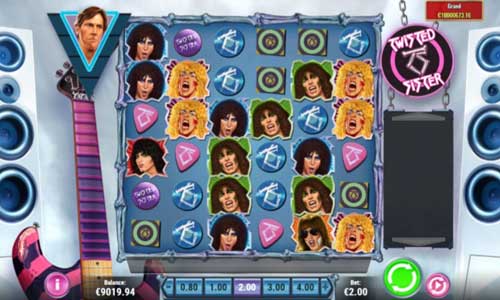 Snider, the lead singer, pays the most at 250x your stake for a cluster of 25+ symbols. This game offers a maximum payout worth 4,500x when factoring in bonuses.

Twister Sister offers two wild symbols, including a regular wild and a wild scatter (Angry Dad from the band’s videos). Both substitute for regular symbols to help form winning clusters.

You can wager between €0.10 and €100 per spin. Autoplay lets you keep the reels spinning with desired betting options for up to 100 rounds.

The Twisted Sister RTP is 96.2%. Volatility rates at 6 out of 10. This volatility rating is lower than the vast majority of Play’n GO games.

Any band member that forms a winning cluster helps fill the Guitar Charge member by one notch. The meter holds up to 15 charges.

You trigger one feature every time you add 5 charges to the meter. The game randomly selects one symbol to benefit from the given bonus. Here are the available features:

This game also features an Angry Dad Meter. This meter features 4 notches that fill by one every time the Angry Dad wild appears in a payout.

When the meter fills, the We’re Not Gonna Take It feature triggers. At this point, extra Angry Dad symbols overfill the meter and increase your win multiplier by +1.

We’re Not Gonna Take It starts with a 2x2 Mega Band Symbol falling to try and clear out the Angry Dads scatters. This process continues until all Angry Dads have been removed from the grid via winning combinations.

The 4,500x maximum win won’t excite you. The background graphics also could’ve been more specific rather than the generic scene that’s presented.

However, Twisted Sister slot does have high points too. It includes a couple of the group’s iconic songs and also features every band member. Some developers don’t manage to pull off the latter due to licensing issues or another problem.

The two meters also form the basis for interesting bonus schemes. You’ll trigger one of three features through the Guitar Charge Meter and another through the Angry Dad Meter.

In summary, Twisted Sister is far from a perfect game. However, it’s better than some of the band-based slots that we’ve reviewed.

Can I play Twisted Sister for free?

- To be able to play Twisted Sister with real money you have to sign up for an account, preferably at one of our recommended online casinos. You can also claim a nice welcome bonus when you sign up as a new player.

- Twisted Sister can pay up to 4500x your stake. This means you can win average amounts of 4500 EUR (when playing with real money) at most when betting 1 EUR.