Play Reactoonz 2 free demo from Playn Go. Try without cost, just for fun. The best way to learn the rules, features and how to play the game. Also read our unique Reactoonz 2 review with rating to get important information about Reactoonz 2 slot.

Tired of playing free demos with fake money? Find safe and trusted online casinos where to play with real money for a chance to win up to 5083x your bet. Sign up and claim our latest welcome bonuses.

Reactoonz 2 is a 7x7 grid slot from Play’n GO. This much anticipated game serves as the sequel to Reactoonz—a hit slot from 2017 that revolves around cartoonish aliens.

The original Reactoonz game is popular thanks to its fun theme and feature-packed play. Does Reactoonz 2 have what it takes to live up, or even surpass, the first game? We’ll discuss this matter by looking at the sequel’s graphics, win potential, features, and more.

Reactoonz 2 features a 7x7 grid and a cluster-pays format. Wins form when you land 5+ matching symbols in a cluster going vertically and/or horizontally.

This format is the same one offered in Reactoonz. If you’ve played the original, then you’ll experience no trouble getting acclimated to the sequel.

Reactoonz 2 offers cascading wins, where symbols from winning combinations disappear. Meanwhile, icons from above fall into their places and allow for more potential payouts.

This slot looks almost identical to the first one. It stuffs 49 aliens into the 7x7 reactor and features charge meters on the sides.

The graphics and feel of Reactoonz 2 are also very close to the original. You’ll be looking at the same alien characters and blue background.

One difference from the original to the sequel includes two meters on the right-hand side. Reactoonz, by contrast, only features one meter on this side. 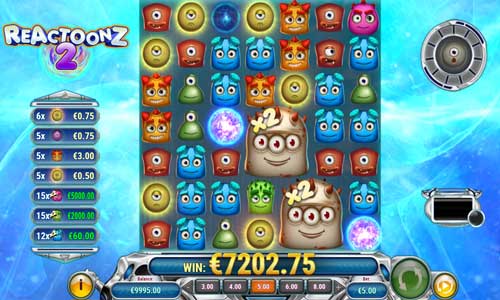 Eight aliens make up the regular symbols. Half of them have one eye, while the other half feature two eyes. As mentioned before, you need to land clusters of 5+ matching aliens to score wins.

You can win up to 500x your stake by getting a cluster of 15+ pink aliens. This game’s maximum payout is worth 5,083x your bet.

Play’n GO gives this slot an 8/10 volatility rating. We’re surprised at this high volatility given the maximum payout (5,083x). However, the plentiful features help pump up the volatility.

This game’s features revolve around cascading reels, various wild symbols, and charge meters. Here’s a closer look at how these bonuses work.

At the start of each round, a one-eyed alien acts as a fluctuating symbol. If it appears in a win, then an Electric Wild will land in an empty space during cascading reels. In addition to substituting for other symbols, Electric Wilds help fill the “Fluctometer.” Once the Fluctometer fills, it releases between 1 and 3 Electric Wilds on the grid. An Uncharged Wild also appears on cascades. It doesn’t possess any special abilities, but it can potentially turn into an Electric Wild.

This feature randomly adds 1-2 multiplier wild icons to the grid. The size of the wild symbol’s multiplier varies based on which character sits next to the reels.

At the start of each round, a one-eyed alien acts as a fluctuating symbol. If it appears in a win, then an Electric Wild will land in an empty space during cascading reels.

An Uncharged Wild also appears on cascades. It doesn’t possess any special abilities, but it can potentially turn into an Electric Wild.

The Electric Wild zaps other symbols. All non-wild icons that get zapped go towards filling the “Quantumeter.”

This meter offers both Energoon and Gargantoon Wilds when it gets charged at certain levels. The four levels include:

When the 3x3 Gargantoon appears in a win, it splits into two 2x2 Gargantoon wilds during the cascade. Assuming these symbols win and cause another cascade, they break down into nine 1x1 Gargantoon wild symbols.

Play’n GO chose not to mess with a proven formula. Reactoonz 2 is quite similar to the first game, but it does offer additional twists.

The Quantumeter is the big game-changer here. It delivers different wild symbols and even a multiplier upon reaching higher levels.

The Quantumeter, Fluctometer, cascading reels, and four wilds really spice up the gameplay. You’ll feel like zaps and explosions are occurring all over the place when these features start combining.

Strangely enough, these bonuses don’t combine for a massive win. The maximum prize is capped at 5,083x your stake, which is above average. The first Reactoonz offers a max win of 4,570x.

We love this sequel and Reactoonz 2 is definitely worth playing. It brings all the fun that the first slot does along with a few extra bonuses.

Can I play Reactoonz 2 for free?

- To be able to play Reactoonz 2 with real money you have to sign up for an account, preferably at one of our recommended online casinos. You can also claim a nice welcome bonus when you sign up as a new player.

- If you are lucky you can win really big amounts of up to 5083x your bet on this game. This means you can win 5083 EUR (when playing with real money) at most when betting 1 EUR.