Just like the original, this five-reel game is based on Mexico’s Day of the Dead (Dia de Muertos). It retains many of the same qualities that have made the first game a huge hit.

However, Esqueleto Explosivo 2 offers more-exciting features. You can read about these extras and why they make the sequel worthwhile below.

Esqueleto Explosivo 2 offers five reels and 99 paylines. The latter is a big upgrade over the 17 lines featured in the first slot.

15 symbols drop onto the 5x3 grid at the start of each round (a.k.a. tumble feature). You form wins by getting at least three matching symbols in a payline. All wins must begin in the first reel and go from left to right.

This sequel’s background looks just like the first version’s backdrop. It places you in a courtyard of a Mexican village.

You’ll see candles, apartments, stairs, and flowers throughout the background. Assuming you like the first game’s atmosphere, then you’ll appreciate what’s offered here as well.

Most symbols are fashioned to look like Mexican sugar skulls. The dead mariachi band belts out Spanish tunes whenever you form wins. 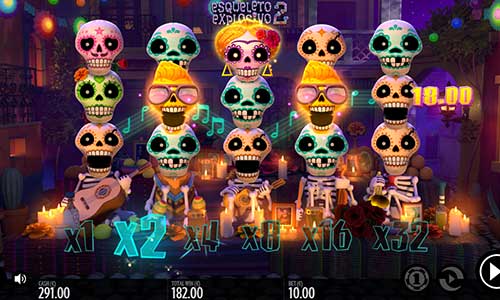 Yet another aspect that has transitioned to Esqueleto Explosivo 2 is the symbols. Most icons are the same, although a few new additions have been made.

A female hooded skull is a perfect example of the latter. It offers the highest regular payout at 5x your stake for five symbols.

This game also features red, green, blue, orange, and turquoise skulls. Their payouts range from 2.5x to 0.7x for five icons, respectively. Max win for this slot is 5,000x bet.

A gold skull with big sunglasses is the Explosivo Wild icon. Appearing on reels 2-4 only, it substitutes for everything except the scatter. A robot skull with red eyes is the scatter, and it triggers a bonus round that we’ll cover later.

The Esqueleto Explosivo 2 RTP is 96.13%. This payout percentage is slightly better than what’s available with the average slot.

This game features a tumble mechanism that sees 15 symbols drop onto the grid at the beginning of each round. Symbols from winning combinations explode and allow new icons to fall into their places.

This process continues until no new payouts can be formed. In short, you can keep collecting more wins within the same round.

The Explosivo Wild blows up anywhere from 3-8 nearby symbols. The only exceptions include high-paying skulls and other wilds.

All tumbling wins increase the Mucho Multiplier. This multiplier begins at 1x and increases each time a win is formed.

This wild icon even removes the lowest Mucho Multiplier during the bonus. After you collect the first three Explosivo Wilds, for example, 1x will be removed and all subsequent bonus rounds begin with a 2x multiplier. This feature continues until free spins end.

However, if you do like this concept, then you’re going to love the sequel. It provides multiple upgrades in the form of 99 lines and a more-detailed bonus. Esqueleto Explosivo 2 also increases the top overall payout from 700x to 5,000x.

You should definitely check this game out if you’re a fan of Thunderkick’s Day of the Dead theme. Esqueleto Explosivo 2 offers big wins and plenty of features that’ll keep you entertained.

Esqueleto Explosivo 2 was released on January 22 2020.

Can I play Esqueleto Explosivo 2 for free?

- To be able to play Esqueleto Explosivo 2 with real money you have to sign up for an account, preferably at one of our recommended online casinos. You can also claim a nice welcome bonus when you sign up as a new player.

- Esqueleto Explosivo 2 can pay up to 5000x your stake. This means you can win average amounts of 5000 EUR (when playing with real money) at most when betting 1 EUR.