Tired of playing free demos with fake money? Find safe and trusted online casinos where to play with real money for a chance to win up to 24000x your bet. Sign up and claim our latest welcome bonuses.

This game looks excellent in terms of graphics and design. But does it live up to the typical Push Gaming standard in terms of features? You can find out as we review The Shadow Order.

The first thing that stands out about this slot is its stellar design. You’re immediately greeted with a secretive atmosphere, complete with a mansion, hedge maze, fountain, and character. The mysterious tune that plays through the game further draws you in.

The Shadow Order consists of four different characters, including Molly and three locked figures. You start the game with Molly and gradually unlock the others by accumulating rings (explained later).

Symbols include a wild (Order Medal), book, electrical contraptions, chess pieces, ring, and three different orbs. The Order Medal substitutes for everything to form wins, except for the orbs, which are also wild. 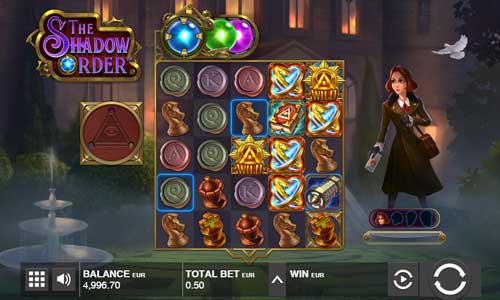 Betting and Other Info

This game operates through a 5x5 grid. Wins happen when three or more matching symbols form a line going horizontally, vertically, or diagonally.

Return to player (RTP) starts at 96.51% and increases as you unlock more characters. Here are The Shadow Order RTP figures based on the number of characters you currently have available.

Cascading reels – Symbols from winning combinations disappear, allowing other icons to fall into their places. This feature continues until no new wins can be formed.

Orb symbols – Orbs sit above the reels and are “charged” by cascading reels. They roll onto the reels after being fully charged. Each orb is a wild symbol that has its own unique powers, which help lead to bigger wins.

Character powers – The four members of The Shadow Order all have unique powers, including the ability to charge Orb 1; convert low-paying symbols to high-paying ones; add 1 wild symbol to each column; and perform cascades with only high-paying icons.

Push Gaming has done an excellent job at creating a slot with plenty of replay value. The Shadow Order is loaded with features and allows you unlock various characters along the way. It also plunges you into a world full of mystery and secrets.

We honestly can’t see much wrong with this game from a design or features perspective. Maybe it could use an interesting second-screen bonus round. But other than this, The Shadow Order slot is nearly perfect and worth checking out.

You can play The Shadow Order online slot for fun or exclusive at Unibet Casino. Also play other Push Gaming slots or try their smash hit Jamming Jars for fun.

The Shadow Order was released on August 1 2019.

Can I play The Shadow Order for free?

- To be able to play The Shadow Order with real money you have to sign up for an account, preferably at one of our recommended online casinos. You can also claim a nice welcome bonus when you sign up as a new player.

- If you are lucky you can win really big amounts of up to 24000x your bet on this game. This means you can win 24000 EUR (when playing with real money) at most when betting 1 EUR.