Tired of playing free demos with fake money? Find safe and trusted online casinos where to play with real money for a chance to win up to 5501x your bet. Sign up and claim our latest welcome bonuses.

Red Tiger Gaming has had great success with Pirates Plenty: the Sunken Treasure, which was released in February 2019. Therefore, they’ve decided to launch a sequel in Pirates Plenty 2.

Effectively titled Pirates Plenty: Battle for Gold, this five-reel, 30-line slot is all about dangerous sea battles and plunder. The game is due out on August 22, 2019, and we’ll preview it ahead of time here.

This slot appropriately takes place on the high seas. The background, which can be seen through the captain’s window, features cannons, clouds, and ocean waters. Overall, Red Tiger has done an excellent job creating the atmosphere.

The base game features five reels, 30 lines, and three rows. However, you can unlock a fourth row, which is explained in the feature section. 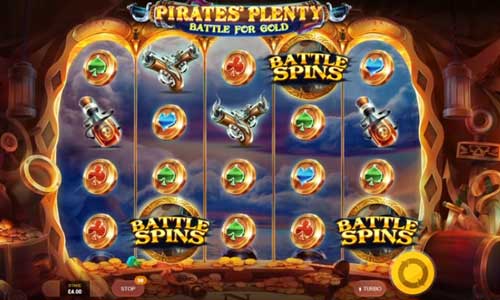 Battle for Gold free spins – This feature is triggered when three or more scatter symbols land on the reels. You receive a random number of free spins and can earn more when cannonballs hit the opposing ship.

Wild Monkey – The monkey was a recurring theme from the first game. He’s back in Pirates Plenty 2 and serves as a wild symbol. This primate also performs other functions, such as offering a multiplier and turning low-paying symbols into higher-paying ones.

Red Tiger might be releasing the sequel a little early in comparison to the first game’s launch. In any case, they’ve done a great job with Pirates Plenty 2.

This slot offers stellar graphics, high RTP, and several features. The free spins are fun, because they incorporate a pirate battle into the equation. You can also look forward to unlocking a fourth row after earning enough maps.

We don’t really see any weaknesses to this game — unless you don’t like pirates for some reason. This being said, we highly recommend that you try Pirates Plenty 2 when it’s released on August 22.

You can play Pirates Plenty 2 Battle for Gold online slot for fun when its released, the first Pirates Plenty The Sunken Treasure, or play other Red Tiger Gaming slots.

Pirates Plenty 2 Battle for Gold was released on August 22 2019.

Can I play Pirates Plenty 2 Battle for Gold for free?

- To be able to play Pirates Plenty 2 Battle for Gold with real money you have to sign up for an account, preferably at one of our recommended online casinos. You can also claim a nice welcome bonus when you sign up as a new player.

- If you are lucky you can win really big amounts of up to 5501x your bet on this game. This means you can win 5501 EUR (when playing with real money) at most when betting 1 EUR.