Play Jolly Roger 2 free demo from Playn Go. Try without cost, just for fun. The best way to learn the rules, features and how to play the game. Also read our unique Jolly Roger 2 review with rating to get important information about Jolly Roger 2 slot.

Jolly Roger 2 is a five-reel, 20-payline slot from Play’n GO. This pirate-themed slot game serves as a sequel to Jolly Roger, which was released back in 2012.

The online gaming world was a very different place eight years ago. Therefore, Play’n GO has revamped the sequel with more features than the original game. We’ll discuss if these upgrades ultimately make Jolly Roger 2 a winner.

This slot features five reels and 20 paylines on a 5x3 grid. Winning combinations form when matching symbols land in a line.

All wins must begin in the first reel and move left to right. That said, the gameplay hasn’t changed from the original Jolly Roger slot to this one.

What has changed, though, are the graphics and atmosphere. The first Jolly Roger looks rather rudimentary by today’s standards.

Jolly Roger 2 is a huge upgrade in the visual department. It features a well-designed sea background, carefully detailed ships, and exciting animations.

The animations include ships fighting at sea during the bonus and gems exploding from the screen during wins. These displays aren’t completely new for the pirate slots genre, but they definitely add entertainment to the game. 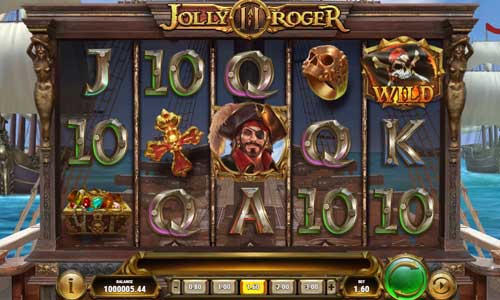 Low pays consist of royals ranging from A through 10. High-paying symbols include a crucifix, diamond, skull, skull ring, and treasure chest.

The treasure chest pays the most among this bunch at 10x your stake for five symbols. You can win a maximum of 5,000x your stake when accounting for features.

The wild symbol (skull and crossbones) substitutes for all other icons to help form wins. It also offers up to 10x your bet for five symbols by itself.

You can wager between €0.20 and €100 per spin. Autoplay and a few other gameplay options are available.

The Jolly Roger 2 RTP is 96.20%. Volatility falls into the medium-to-high range due to the multiple features (covered next).

You’ll notice a compass that sits above the reels. It can randomly activate the Compass feature, which adds a win multiplier worth 2x, 3x, 5x, 8x, or 10x to the current round.

You trigger the Bonus Quest when landing three scatters on reels 1, 3, and 5. This bonus begins with you selecting scrolls until finding three matching bonuses.

The Battle Spins work differently than the average free spins round. They award you three lives to fight the enemy. This bonus lasts until all three of your lives run out.

The game randomly chooses an opponent for your buccaneers to fight, including a Merchant Ship or one of three Privateer Ships (British, Dutch, or Portuguese). Your prize at the end of the bonus depends upon which opposing side you beat.

Battles take place on a special 3x3 grid, which contains privateer and pirate coins. Each battle round is decided by which side gets the most coins on the grid (i.e. 5+ coins wins).

You gain an extra life after beating a Privateer. You’ll also receive a free spin with the compass feature active, a stacked wild (1x3), and a Victory Reward. Here are the available Victory Rewards, depending upon which Privateer ship you defeat:

You lose a life whenever a Privateer gets more coins during a round. However, you’ll at least receive one free spin with a stacked wild out of the deal.

You automatically beat the Merchant ships every time. Therefore, no extra life is awarded during these battles. Furthermore, the ensuing free spins only offer a stacked wild with no compass multiplier or other modifiers.

This feature offers one free spin and displays 5 rum bottles before the spin starts. You choose the bottles until a poisoned one turns up.

Instant Payout Prizes deliver a single payout worth between 2x and 20x your stake. Again, you can potentially get the Compass feature with this bonus too.

Treasure Hunt starts you off with 10 free spins. You’ll notice a map beneath the reels that shows a ship, “X,” and your current number of remaining moves.

Every four map symbols that land during a free spin move the boat forward on the map. If the ship reaches an X, it reveals a treasure chest that offers +2 or +3 free spins and a modifier.

Modifiers can include symbol-to-wild transformations, symbol upgrades, and a win multiplier. 7 total chests are available. If you collect them all, the map symbols disappear and the bonus plays out with your accumulated modifiers.

Jolly Roger 2 was definitely worth the wait. It manages to improve upon every aspect of the original and is one of the better pirate-themed slots that we’ve played.

The graphics, features, and animations are far better in the sequel. Play’n GO also retained entertaining parts from the original game, including selecting rum bottles and searching for treasure.

Jolly Roger 2 does a great job of incorporating the theme into the features. You’ll do battle with opposing ships, dig for buried treasure, and chug rum bottles.

We don’t really see a serious weakness with this slot. You may yearn for larger than a 5,000x maximum payout. Then again, the 5,000x top prize is at least in line with the gaming industry’s average.

In summary, Jolly Roger 2 is an excellent pirate slot that offers everything you could hope for in terms of graphics, adventure, and features.

Can I play Jolly Roger 2 for free?

- To be able to play Jolly Roger 2 with real money you have to sign up for an account, preferably at one of our recommended online casinos. You can also claim a nice welcome bonus when you sign up as a new player.

- Jolly Roger 2 can pay up to 5000x your stake. This means you can win average amounts of 5000 EUR (when playing with real money) at most when betting 1 EUR.