Tired of playing free demos with fake money? Find safe and trusted online casinos where to play with real money for a chance to win up to 12150x your bet. Sign up and claim our latest welcome bonuses. 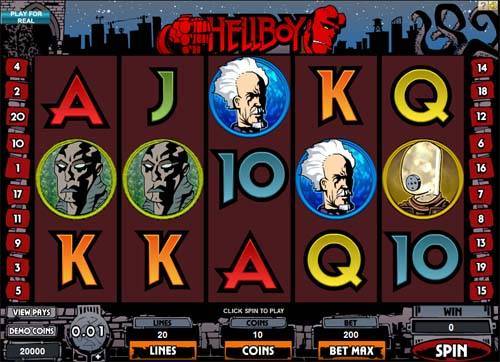 Microgaming has been on a nostalgia kick with Immortal Romance. In 2020, they dropped a remastered version, which includes a larger maximum bet and more features.

Now, Microgaming is boosting the top payout considerably with Immortal Romance Mega Moolah. This slot combines the classic elements of Immortal Romance with a huge progressive jackpot. You can read more about this jackpot along with what else the Mega Moolah version brings to the table.

Nothing has changed regarding gameplay in Immortal Romance Mega Moolah. This slot offers the same 5-reel, 243-ways setup as the original. Winning combinations form in adjacent reels, beginning with the first reel.

The atmosphere is the same as with the original slot too. You’ll see the faint outline of cathedral-style windows in the background. Small glimmers of light protrude from the top of the screen.

A gargoyle statue sits on the top-left side of the reels. Meanwhile, an angel statue rests on the top-right of the grid.

The only thing that’s changed visually from Immortal Romance to the Mega Moolah version is a jackpot display. The left side of the screen shows counters for all four progressive jackpots (covered later).

It also displays trees and leaves above the counters as an ode to the African-themed Mega Moolah slot. The leafy jackpot counters provide a strange contrast next to Immortal Romance’s brooding theme. Low-paying symbols consist of gothic-looking royals ranging from A through 9. Higher pays include books w/ a candle, the vampires’ manor, Amber, Michael, Sarah, and Troy.

Sarah pays the most among this bunch at 16.7x the stake for five symbols. You can win up to 12,150x your stake through the top non-jackpot prize.

This game also offers a wild symbol. The wild replaces regular pays to complete winning combinations and doubles the wins. It also delivers its own payouts worth up to 50x the stake for five.

You can wager between €0.30 and €6 per spin. Any bet in this range qualifies you to win the four progressive jackpots.

The Mega Moolah’s payback version is turned down to account for the jackpots that Microgaming must seed. Its RTP steadily rises as the jackpots grow in value.

Volatility is extremely high for this slot. Immortal Romance already features high volatility, but this version is even more volatile due to the jackpots.

Besides its stellar vampire theme, Immortal Romance originally became a hit thanks to its many features. Nothing has changed in this regard with the Mega Moolah variation. In fact, this game only adds to the excitement with multiple progressive jackpots.

Triggered randomly in the base game, Wild Desire causes anywhere from 1 to 5 reels to fill with wild symbols. By filling all 5 reels with wilds, you can look forward to the maximum regular payout of 12,150x the stake. A hallmark of Immortal Romance, Chamber of Spins represents multiple sets of free spins based on each character.

The first available set of free spins contains Amber’s modifier. You unlock the other three characters by triggering the bonus so many times.

Here’s what each type of free games offers in order of when they’re available:

This slot is connected to Microgaming’s famed Mega Moolah jackpot network. The “Mega” Jackpot has paid prizes worth as much as €18.9 million!

You can also look forward to playing for three smaller progressive jackpots too. Here’s how the Immortal Romance Mega Moolah Jackpots are initially seeded:

How Does This Game Compare to Other Mega Moolah Slots?

The Mega Moolah series has never been known for incredibly designed slots. Sure, Microgaming has tried with Absolootly Mad Mega Moolah, which offers a visually appealing take on Wonderland.

The original Mega Moolah is a nice all-around safari trip. However, it’s nothing special by today’s standards.

Immortal Romance, on the other hand, is a timeless slot that still draws many players today. It brings an iconic game to the Mega Moolah group that should help pump up the Mega Jackpot to even greater proportions.

The tale of vampires competing for love never gets old—especially when it’s packaged in a slot with graphics, animations, and features that truly stand out.

Immortal Romance still sets the gold standard for vampire slots a decade later. It’s only more relevant now that it comes with a multimillion-euro jackpot on the side.

If you love the original game and chasing huge payouts, then you’ll find everything you need with Immortal Romance Mega Moolah. This slot not only has multiple progressive jackpots but also plenty of features.

Immortal Romance Mega Moolah does suffer from a couple of downsides, though, in the form of low RTP and the weird leafy jackpot display.

The RTP is just 93.4% when jackpots are first seeded. This payout percentage will rise, but it’s also highly subject to volatility when considering the jackpots. You may appreciate the friendly confines of the original’s 96.86% RTP.

The leafy jackpot counter display is, again, odd when placed next to Immortal Romance’s dark atmosphere. It takes a something away from the otherwise gothic feel.

Other than these minor drawbacks, Immortal Romance Mega Moolah is immediately the best entry in the Mega Moolah series. It’s far above the other games regarding graphics, theme, and features.

Can I play Immortal Romance Mega Moolah for free?

- Yes! You can try our free play demo for fun, without risk of losing any money, right here on Casinogamesonnet.com. You can also play fake money demos for free at most of our recommended casinos that have slots from Microgaming.

- To be able to play Immortal Romance Mega Moolah with real money you have to sign up for an account, preferably at one of our recommended online casinos. You can also claim a nice welcome bonus when you sign up as a new player.

- If you are lucky you can win really big amounts of up to 12150x your bet on this game. This means you can win 12150 EUR (when playing with real money) at most when betting 1 EUR.

- Yes it has! If you are extremely lucky you can win really big jackpot amounts, sometimes millions, when playing this game.

Where can I find the best Microgaming slots?