Play Hades Gigablox free demo from Yggdrasil Gaming. Try without cost, just for fun. The best way to learn the rules, features and how to play the game. Also read our unique Hades Gigablox review with rating to get important information about Hades Gigablox slot.

Tired of playing free demos with fake money? Find safe and trusted online casinos where to play with real money for a chance to win up to 11129x your bet. Sign up and claim our latest welcome bonuses.

Developed by Yggdrasil Gaming, Hades Gigablox is a 6x6 grid slot with 50 paylines. It follows Yggdrasil’s first Gigablox game, Lucky Neko, which came out just a few months ago.

The latter recently introduced players to the Gigablox engine. Now, Yggdrasil is already adding on this concept with yet another title.

Lucky Neko has been a solid hit so far. We’ll discuss whether Hades Gigablox figures to be a success as well.

This slot features a 6x6 grid with 50 lines. This setup is strange when considering that most 6x6 games feature cluster pays.

Therefore, the 50 lines feel somewhat restricting for such a large grid. But as we’ll cover later, you probably won’t even notice the fairly low number of lines.

The best qualities to this slot include the graphics and animations. Everything from the symbols to the background offer high-quality visuals.

Yggdrasil has done an outstanding job of putting tiny details into the symbols. Meanwhile, a collection of terrifying beast skulls line the reels on both sides.

Hades stands off to the right side with a ball of blue fire in his hands. He also jumps onto the reels to fight various underworld monsters.

A hard rock tune plays throughout the game. The music completes this exciting journey into the Greek underworld. 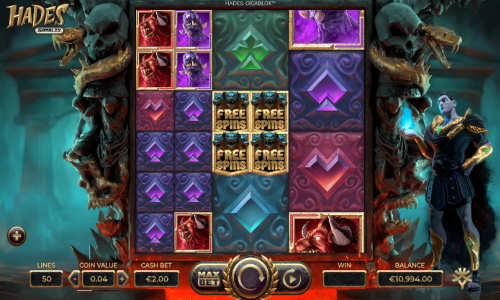 Low pays consist of cards suits, including a club, diamond, heart, and spade. High-paying symbols include four underworld monsters that pay between 4x and 8x your stake for six symbols.

Lucky Neko Gigablox offers a max win worth 6,953x your stake. Hades delivers around the double max win of 11,128x your total bet.

This slot features medium volatility along with a hit rate of 20.5%. Yggdrasil notes that the bonus round hits on 1 out of every 400 spins.

Hades brings back the same unique Gigablox mechanic that’s seen in Lucky Neko. If you haven’t played the latter, then you may have trouble adjusting to this engine at first. Oversized symbols randomly fall from the top with no rhyme or reason.

Nevertheless, you should be able to pick up what’s happening with a little explanation. The Gigablox engine features at least one large symbol (a.k.a. blox) on every spin. Gigablox symbols range in size from 2x2 to 6x6. You’re obviously hoping for the latter range, so that you can form bigger wins.

While playing, you’ll notice that Hades sometimes gets into an attack position. He then leaps onto the reels to battle monsters in what’s known as the Hades Wild Hunt feature.

This bonus turns all of the monsters that Hades destroys into wild symbols. Paylines are re-evaluated afterward to account for new wins that stem from the wilds.

Hades Wild Hunt is active during every free game. Each monster that Hades beats will add +1 to the Multiplier Bar. If Hades defeats a 4x4 block full of monsters, for instance, then 16 points will be added to this bar.

Each scatter that lands during the bonus delivers +1 free spin. Therefore, you can keep the bonus round going for quite a while by getting lots of scatters.

If there’s one thing that Yggdrasil Gaming knows, it’s dark journeys to hell. They’ve hung their hat on the Vikings Go to Hell series for years. Yggdrasil has successful conjured up the demons again for another masterpiece in Hades Gigablox.

You may not be blown away by the win potential or number of features with this slot. However, you should find more than enough to like about Hades otherwise.

For starters, the graphics and cinematic quality are out of this world. Yggdrasil has spared no detail when designing Hades, the symbols, and the twisted Greek underworld.

The Gigablox mechanism is a success in this game—just like it was with Lucky Neko. However, Hades Gigablox is filled with more excitement and entertainment that Lucky Neko, which is saying a lot.

On paper, the fact that the bonus only comes around on 1 out of every 400 spins sounds frustrating. But this game is one instance where we don’t mind waiting on free spins. The overall presentation, Gigablox, and Hades Wild Hunt keeps us quite entertained during the base game.

In summary, Hades Gigablox is another hit from Yggdrasil. It’s better than Lucky Neko Gigablox in many ways and really takes this mechanism to another level.

Hades Gigablox was released on October 23 2020.

Can I play Hades Gigablox for free?

- To be able to play Hades Gigablox with real money you have to sign up for an account, preferably at one of our recommended online casinos. You can also claim a nice welcome bonus when you sign up as a new player.

- If you are lucky you can win really big amounts of up to 11129x your bet on this game. This means you can win 11129 EUR (when playing with real money) at most when betting 1 EUR.