Tired of playing free demos with fake money? Find safe and trusted online casinos where to play with real money for a chance to win up to 6950x your bet. Sign up and claim our latest welcome bonuses.

This slot looks and plays quite unusual compared to similar games. You can find out more about Lucky Neko Gigablox slot below.

Wins form whenever three or more matching symbols land in a payline. All payouts must start in the first reel and move left to right.

This game's background is definitely unique. It takes place outside of a Japanese temple and offers lots of small details.

You'll see cherry blossom trees, vases, bushes, and banners with Japanese writing in the background. The Maneki Neko sits on the left-hand side and waves while you play.

Lucky Neko Gigablox is far from the first slot to revolve around the beckoning cat or Japan. However, it certainly looks and feels different from the rest. 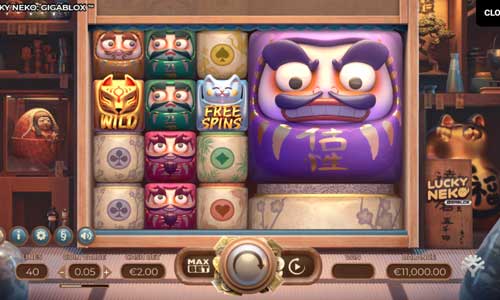 The pink Daruma offers the highest payout at 8x your stake for six symbols. You can win up to 6,953x your bet when accounting for features.

You can wager anywhere from €0.08 to €100 per spin. Autoplay lets you keep the reels spinning automatically with your chosen bet size for up to 1,000 rounds.

The Lucky Neko Gigablox RTP is 96.4%. Hit frequency sits at a low 15.45%. Volatility rates in the medium-to-high range.

Yggdrasil has become known for their Splitz mechanism, where multiple symbols fit into one position. They're going the opposite direction with the Gigablox model.

The latter refers to over-sized symbols that appear in 2x2, 3x3, or 4x4 size. You're guaranteed at least one Gigablox in every round.

You trigger free spins by landing five or more scatter symbols anywhere on the reels. The number of free spins match the quantity of triggering scatters.

During this bonus, the grid grows from 6x4 to 6x8 (four additional rows) and features 85 paylines. You can also land Gigablox as large 5x5 or 6x6.

Before the bonus starts, the game randomly chooses one icon to serve as the Blessed Symbol. The Blessed Symbols' value increases by 5x throughout free spins. The pink Daruma, for example, would go from 8x to 40x for five symbols.

Yggdrasil's Splitz mechanism takes some getting used too. However, you shouldn't need much time to adjust to Gigablox.

The latter is a straightforward feature that merely involves over-sized blocks. Gigablox start at 2x2 and can grow up to 6x6 in the bonus round.

The background is highly detailed and looks different from any slot we’ve seen. You’ll even see little weeds growing in between the sidewalk leading to the temple.

Overall, Yggdrasil has done an excellent job of introducing a game that’s fresh without being confusing. The Gigablox model is pretty self-explanatory and really adds to the excitement.

This game could stand to offer another feature or two in the base game. But the Gigablox should still keep you entertained until you can trigger the bonus.

Can I play Lucky Neko Gigablox for free?

- To be able to play Lucky Neko Gigablox with real money you have to sign up for an account, preferably at one of our recommended online casinos. You can also claim a nice welcome bonus when you sign up as a new player.

- If you are lucky you can win really big amounts of up to 6950x your bet on this game. This means you can win 6950 EUR (when playing with real money) at most when betting 1 EUR.