Tired of playing free demos with fake money? Find safe and trusted online casinos where to play with real money for a chance to win up to 9583x your bet. Sign up and claim our latest welcome bonuses.

FIRE IN THE HOLE

Golden Genie and the Walking Wilds Reviewed July 7 2020 by Casinogamesonnet.com

Golden Genie and the Walking Wilds is a five-reel, 20-line slot from Nolimit City. It features an Aladdin-like tale that’s set in the Arabian desert.

Nolimit City has had plenty of success with recent releases like Punk Rocker and Deadwood. We’ll discuss if Golden Genie and the Walking Wilds slot is another winner.

This game features five reels and 20 paylines. You need at least three matching symbols in a line to win.

During the base game, all winning combinations must start in the first reel and move left to right. As we’ll cover later, one feature offers a both ways pays mechanism.

The background showcases a nighttime sky that’s visible from a palace window. You’ll see light clouds shifting across the sky.

The soundtrack offers a mysterious Arabian beat. Overall, this is a nice adaptation of a genie story that feels different from most Aladdin/genie slots. 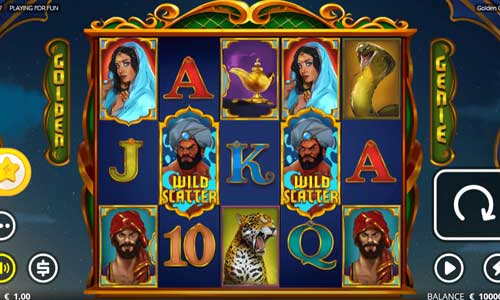 Low pays include royals ranging from A through 10. High-paying symbols include a lamp, leopard, serpent, princess, and Aladdin-like character.

The princess pays the most among this bunch at 25x your stake for five icons. You can win up to 9,583x your bet when accounting for features.

A genie serves as both the scatter and wild symbol. It substitutes for all standard symbols to help form payouts.

You can win between €0.20 and €100 per spin. Autoplay settings allow you to keep the reels spinning automatically for between 10 and 1,000 rounds.

The Genie and the Walking Wilds RTP is 96.03% by default. However, operators can choose a lower RTP setting at 94.11%. You should definitely check the pay table to see which version you’re getting.

The hit frequency is 33.91%. Volatility is fairly high due to the 9,583x top payout along with multiple features.

Genie lamps are key to a Stacked Wilds feature during the base game. The stacked lamp wilds randomly land on reels 2 and 4 while the remaining reels spin.

The Genie Wishes feature triggers during base play when Aladdin lands on the left side of the lamp. All lamp and Aladdin symbols become wild during this feature. They turn into genie symbols if Genie Wishes happens during the bonus round.

Additionally, all regular symbols feature a random multiplier. They can be worth 2x, 3x, 4x, 5x, or 10x their normal amount during Genie Wishes.

All genies in view start with a 1x win multiplier. They each move one reel to the left after every spin until exiting the grid (a.k.a. walking wilds).

One of the genies serves as the Golden Genie. The latter sees its 1x multiplier increase by +1 on every spin.

The Golden Genie transfers its increased multiplier to each of the other active genies. Once it exits the grid to the left, its accrued multiplier transfers to the closest genie remaining on the reels. Multipliers that combine in winning combinations add to each other (e.g. 2 + 2 = 4x).

Again, Genie Parade free spins and accompanying modifiers continue provided at least one genie remains on the grid. But this feature ends when the last wish-granter leaves the reels.

You can use the Nolimit Bonus Buy option to automatically trigger free spins at any time. You’ll need to pay 80x your stake to make this happen. RTP increases from 96.03% to 96.36% when you use Bonus Buy.

Final Thoughts on Golden Genie and the Walking Wilds Slot

Nolimit City hasn’t broken any new ground with the theme here. After all, Aladdin-style stories have been cropping up in the online slots world for two decades.

However, Genie and the Walking Wilds still manages to be an interesting slot thanks to its multiple features. You can look forward to Stacked Wilds and Genie Wishes bonuses during the main game.

You probably won’t be amazed by the theme in Genie and the Walking Wilds. However, you might still find this slot worth playing for a while.

Golden Genie and the Walking Wilds was released on July 7 2020.

Can I play Golden Genie and the Walking Wilds for free?

- To be able to play Golden Genie and the Walking Wilds with real money you have to sign up for an account, preferably at one of our recommended online casinos. You can also claim a nice welcome bonus when you sign up as a new player.

- If you are lucky you can win really big amounts of up to 9583x your bet on this game. This means you can win 9583 EUR (when playing with real money) at most when betting 1 EUR.