Tired of playing free demos with fake money? Find safe and trusted online casinos where to play with real money for a chance to win up to 26261x your bet. Sign up and claim our latest welcome bonuses.

Tomb of Akhenaten is a five-reel, 243-ways slot from Nolimit City. Akhenaten was the 10th ruler of the Eighteenth Egyptian Dynasty and the father of King Tutankhamun.

Egyptian-themed slots are widespread throughout the gaming world. Tomb of Akhenaten at least includes some originality by covering a lesser-known historical figure. We’ll discuss what else this game offers that separates it from the pack below.

Tomb of Akhenaten features five reels and 243 ways across a 5x3 grid. This setup seems rather basic by modern standards. As we’ll cover later, though, the ways can actually grow to 3,125.

Winning combinations form when matching symbols land in adjacent reels. Each win must start in the first reel and move left to right.

This slot takes place inside of a nondescript pyramid setting. Upon selecting the spin button, you’ll see a system of rope pulleys operate the reels.

Upon triggering the bonus, you’ll go inside of Akhenaten’s tomb. The tomb only has minor differences from the base game’s background, including hieroglyphics, two gold Akhenaten statues, and gold coins on the ground.

We can’t say that this slot offers the most-original Egyptian atmosphere we’ve ever seen. Nevertheless, the graphics and background are well done. 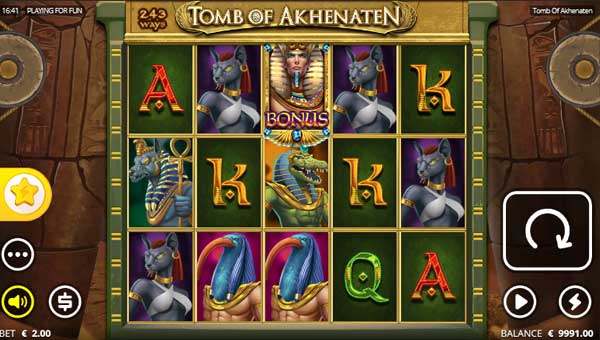 Low-paying symbols include stylized royals ranging from A through 10. Higher pays consist of various Egyptian gods, including Anubis, Bastet, Ra, Sobek, and Thoth.

Ra pays the most among this group at 5x your total bet for five symbols. You can win up to 26,261x your stake when accounting for features.

An explorer, who looks like Tomb Raider’s Lara Croft, serves as the wild symbol. She substitutes for regular pays to help create wins. A pyramid also serves as a wild and comes into play during certain bonuses.

This game’s hit rate is 26.22%, which means that you’ll win just over a quarter of your spins. Nolimit City rates the volatility at 9/10, meaning this slot can put you through some rough patches.

Tomb of Akhenaten’s features revolve around Sticky Win Spins and free spins. You can read more on each of these bonuses below.

Regarding the third respin, a meter at the top of the grid determines how many Pyramid wilds are added. All regular icons above the Pyramid wild also become wilds.

Any wild symbols that are already above the Pyramid become double wilds (i.e. two wild symbols in one space). After the third respin, a new round begins with the standard 243 ways.

You need to land 3+ scatter symbols to launch Akhenaten Spins (a.k.a. free spins). You receive 8 free spins for three scatters along with +2 free spins for each additional scatter.

This feature offers a win multiplier that increases +1 following every Sticky Win Spin. You’ll also receive +1 free spins whenever a scatter symbol lands during the bonus.

Akhenaten Spins occur one out of every 189 spins. However, you can immediately trigger the bonus by using feature buy. The latter sees you spend 65x or 105x your stake for 8 or 12 free spins, respectively.

Similar Slots to Tomb of Akhenaten

First off, they both feature the same Lara Croft-type adventurer along with similar graphics. They also include the same kind of features, including respins following wins and free games.

The main difference between these two games is win potential. Tomb of Akhenaten offers a 26,261x top payout, while Nefertiti only provides a 3,768x maximum win.

Nolimit City has experienced success with Tomb of Nefertiti. The Akhenaten follow-up is more of the same in certain respects. However, it does improve greatly on the win potential through its massive top prize.

As a standalone game, Tomb of Akhenaten stacks up well to other Egyptian-style slots. It offers an interesting feature in Sticky Win Spins along with a lucrative bonus round.

You probably won’t see Tomb of Akhenaten as a ground-breaking edition to this genre. But if you’re not tired of Egyptian-themed games yet, then you should appreciate this slot.

Tomb of Akhenaten was released on December 10 2020.

Can I play Tomb of Akhenaten for free?

- To be able to play Tomb of Akhenaten with real money you have to sign up for an account, preferably at one of our recommended online casinos. You can also claim a nice welcome bonus when you sign up as a new player.

- If you are lucky you can win really big amounts of up to 26261x your bet on this game. This means you can win 26261 EUR (when playing with real money) at most when betting 1 EUR.