Play Money Train 2 free demo from Relax Gaming. Try without cost, just for fun. The best way to learn the rules, features and how to play the game. Also read our unique Money Train 2 review with rating to get important information about Money Train 2 slot.

Money Train 2 is a five-reel, 40-line slot from Relax Gaming. It serves as the sequel to Relax’s 2019 hit Money Train.

The original game uses an inventive setup that includes a train cart with five reels rolling into view. Money Train became quite popular thanks to its unique atmosphere and features.

However, this same slot has also been heavily criticized for offering boring base game play. We’ll discuss whether Money Train 2 fixes these issues below.

This game has five reels and 40 paylines set on a 5x4 grid. Gameplay is pretty basic, with wins forming when 3+ symbols land in a payline. Additionally, all wins must start in the first reel and move left to right.

The theme has changed a little from the original Money Train to Money Train 2. The first game features a traditional Wild West setting. Meanwhile, the sequel offers a steampunk-style train that’s more futuristic-looking.

Personally, we like the original game’s setting more. However, we also appreciate how Relax Gaming made the sequel look and feel different than the original.

It would be difficult for Relax to top what makes Money Train special. But the sequel still features an entertaining atmosphere from an overall standpoint. 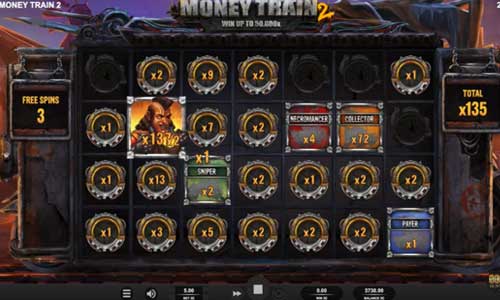 Low pays consist of a club, diamond, heart, and spade—all of which are metal to keep up with the steampunk theme. High pays include the same characters from the original slot, only with different looks to match the futuristic vibe.

They include a gun-toting female, green sniper, debt collector, and necromancer. The necromancer pays the most out of regular icons at 20x your stake for five symbols. You can win up to a whopping 50,000x your stake when including bonuses.

A skull with pipes coming out of it is the wild symbol. It substitutes for other symbols to create wins and also offers payouts of its own worth up to 20x for five.

The volatility is really high when considering the features and 50,000x max win. As a result, the hit frequency is quite low at 19.55%.

If you’ve played the first Money Train, then you’ll find the sequel’s features to be relatively similar. However, Money Train 2 does bring one fresh bonus to the table.

We’ll start with the biggest gamechanger, which is the Respins feature. Triggered by 2 scatter symbols in the main game, this bonus sees both scatters reveal a win multiplier.

The two multipliers are added together before a respin takes place. If this round fails to produce a win, then another respin happens with the multiplier increased by +1.

This process continues until a winning combination finally occurs. The total multiplier is then applied to the win.

The Respins feature is a gamechanger because it spices up the main game. As mentioned before, the main knock against Money Train is the boring base play.

You trigger the Money Cart Bonus Round when 3+ scatters land anywhere on the reels. Day turns to night, and another train that only holds special symbols rolls into town.

This bonus awards you 3 spins with sticky triggering scatters. The scatters values are added to create a win multiplier that applies to your total bet.

Each new symbol that lands during the Money Cart Bonus resets the spins to 3. Its value also gets added to the win multiplier.

In addition to resetting the spins and adding to the multiplier, some symbols offer modifiers. You can see the list of icons and their modifiers below:

The Money Cart Bonus Round offers too many symbols to keep track of in the beginning. But as you can see, each icon adds plenty of win potential to this feature.

If you don’t want to wait for the Money Cart Bonus to come naturally, you can always use the bonus buy option. Bonus buy involves spending 100x your stake to automatically trigger the feature on the ensuing spin.

Money Train 2 gives us mixed emotions. On one hand, we love how the Respins add more pop to the base game.

This feature happens just frequently enough to keep the main game interesting. In short, Relax Gaming has improved upon the glaring weakness of Money Train.

However, we also appreciate the original game’s atmosphere more. While Money Train 2 isn’t a bad-looking slot by any means, we like the first game’s traditional Old West setting.

Win potential has been turned up in the sequel. While the first slot offers a respectable 20,000x max win, the sequel delivers up to 50,000x your bet. This massive payout is attributed to a slightly revamped Money Cart Bonus, which contains more volatility and larger wins.

In summary, Money Train 2 has a less-appealing atmosphere than the original. However, it makes up for this aspect by featuring bigger payouts and more-exciting base play.

Check in this fantastic big win at Money Train 2

Can I play Money Train 2 for free?

- Yes! You can try our free play demo for fun, without risk of losing any money, right here on Casinogamesonnet.com. You can also play fake money demos for free at most of our recommended casinos that have slots from Relax Gaming.

- To be able to play Money Train 2 with real money you have to sign up for an account, preferably at one of our recommended online casinos. You can also claim a nice welcome bonus when you sign up as a new player.

Where can I find the best Relax Gaming slots?