Tired of playing free demos with fake money? Find safe and trusted online casinos where to play with real money for a chance to win up to 20000x your bet. Sign up and claim our latest welcome bonuses.

CURSE OF THE WEREWOLF MEGAWAYS

Great Rhino Megaways is a six-reel slot from Pragmatic Play. It’s a remake of Pragmatic’s Great Rhino slot that launched in 2018.

Great Rhino Megaways features six reels and up to 200,704 ways to win. Every reel can hold between two and seven symbols. The game/software randomly chooses how many icons appear in each reel before every round begins.

Wins form when matching symbols land in adjacent reels. Each payout must start in the first reel and move from left to right.

This game offers cascading reels, where symbols from winning combinations disappear and allow new icons to take their places. This process continues until no more wins can be formed.

Regarding the atmosphere, this game takes place on the African savanna. You’ll see acacia trees, zebras, and rhinoceroses in the distance.

The look is similar to that of Pragmatic Play’s earlier Great Rhino slot. Pragmatic hasn’t really done much to upgrade this game from a visual standpoint. 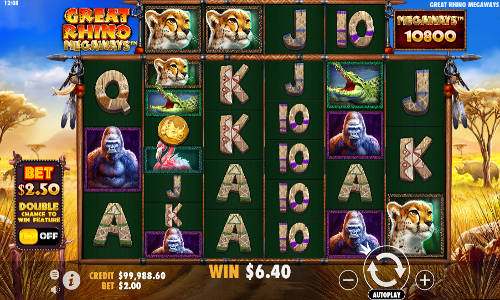 Regular symbols include royals (A through 10), a cheetah, crocodile, flamingo, and gorilla. The cheetah pays the most among this bunch at 50x your stake for six symbols. You can win up to 20,000x your stake when accounting for features.

The rhino serves as the wild symbol. Substituting for everything except the scatter, it only appears in the 1x4 row.

This game’s volatility is quite high due to the 20,000x maximum payout and features. That said, you’ll experience plenty of slow periods where you don’t win any/many payouts.

A golden rhino coin serves as the scatter symbol. You trigger free spins when landing four or more of these scatters anywhere on the reels. After triggering the bonus, you choose one of the following options:

The latter option offers the ability to earn up to 15 free games with a 10x multiplier. However, you could also end up with just 5 free spins and a 1x multiplier.

When triggering the bonus with more than four scatters, you can look forward to extra free spins on top of your chosen starting amount.

The bonus features a win multiplier that increases +1 for every cascading win. No limit exists on how large the multiplier can grow during free spins.

You can activate the Ante Bet at any point during play. For a small extra cost, the Ante Bet adds more scatters to the reels and gives you a stronger chance of triggering the bonus round.

Great Rhino Megaways isn’t a bad game by any means. However, it doesn’t add much to the Megaways genre either.

Pragmatic Play really played it safe here by going back to one of their older games. Perhaps they didn’t feel comfortable trying to reinvent the wheel on their first Megaways attempt.

This slot doesn’t offer anything impressive regarding features. Instead, it mainly relies on the Megaways mechanic to keep things entertaining.

Perhaps the most-appealing aspect of Great Rhino Megaways is the 20,000x maximum prize. This amount goes quite well with the potential 200,704 ways to win.

In summary, Great Rhino Megaways slot is okay for a short session. But if you’ve already played lots of Megaways games, then you won’t find anything new with this one.

Can I play Great Rhino Megaways for free?

- Yes! You can try our free play demo for fun, without risk of losing any money, right here on Casinogamesonnet.com. You can also play fake money demos for free at most of our recommended casinos that have slots from Pragmatic Play.

- To be able to play Great Rhino Megaways with real money you have to sign up for an account, preferably at one of our recommended online casinos. You can also claim a nice welcome bonus when you sign up as a new player.

- If you are lucky you can win really big amounts of up to 20000x your bet on this game. This means you can win 20000 EUR (when playing with real money) at most when betting 1 EUR.

Where can I find the best Pragmatic Play slots?