Age of the Gods Slot Free Play and Review

Play free Age of the Gods slot from Playtech and read our review here at CasinoGamesOnNet.com. Try Age of the Gods online slot free play demo just for fun or learn how to play the game. Find the best Playtech casinos and Age of the Gods casinos with the best sign up bonuses and play this 20 paylines/ways to win casino slot with real money.

Age of the Gods Slot Features 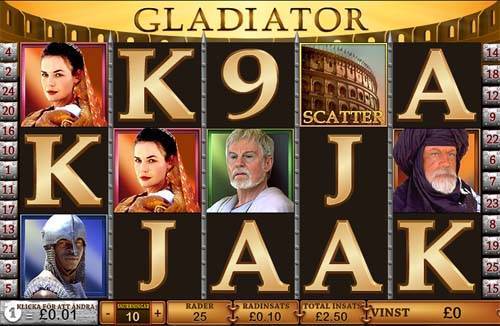 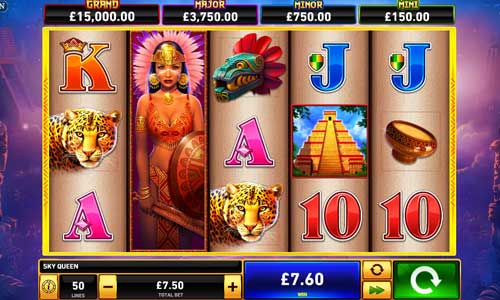 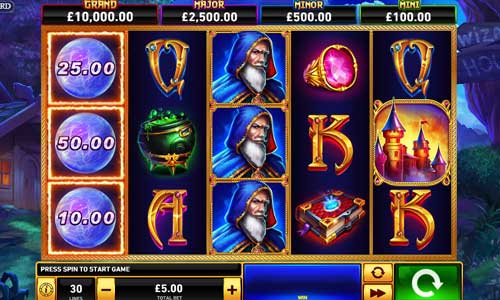 BLUE WIZARD
« BACK
PLAY AGE OF THE GODS FOR REAL HERE

MORE AGE OF THE GODS CASINOS

Age of the Gods Review

Age of the Gods is a five-reel, 20-line slot from Playtech. As the name implies, it revolves around Greek mythology.

Age of the Gods’ theme is definitely lacking originality. We’ll discuss if it separates itself from the pack in any way.

The atmosphere in Age of the Gods isn’t very good. The reels dominate the vast majority of the screen. You can see a small version of Mount Olympus on the left-hand side. But most of the remaining background is taken up by a dark-blue sky.

The symbols are certainly better than the background. However, they’re nothing amazing from a visual standpoint. Symbols include a wild, game logo (scatter), Aphrodite, Hades, Hera, Hercules, Poseidon, Zeus, a helmet, and generic letters.

The wild icon offers the largest payout at 10,000x your stake. It also substitutes for everything except for the Age of Gods logo to form wins.

You can change your bet size from €0.20 to €40 per spin. You can also use autoplay to keep the reels spinning automatically for between 10 and 99 spins. Turbo play allows you to speed up how quickly the reels finish spinning. The Age of the Gods RTP is 95.02%, which is below average. 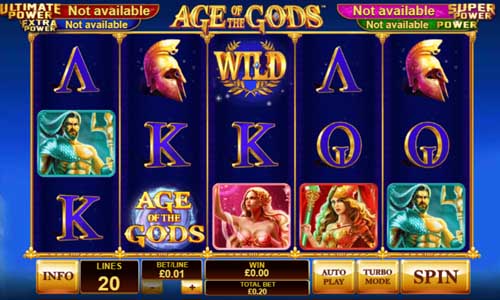 After triggering the bonus, you’ll be taken to a screen where 20 bronze coins are on the game screen. You select these coins until finding three matching gods. Here are the available options:

Athena Free Spins – Offers a random multiplier worth between 2x and 5x on all wins.

Poseidon Free Spins – Poseidon shoots lightning from his trident to turn up to five icons into random wilds.

Zeus Free Spins – You begin with a 1x multiplier on wins. This multiplier increases 1x after every three spins. You also receive a sticky wild in the center position of the reels.

In addition to these features, Age of the Gods also offers four progressive jackpots. The Ultimate Power Jackpot, the largest of these prizes, is worth $487,455 at the time of this review.

Final Thoughts on Age of the Gods Slot

Game developers take on a difficult task when they make a Greek mythology slot. Therefore, they have to create something truly special to differentiate themselves. Playtech has done a poor job of this with Age of the Gods.

This slot comes off as a generic take on Greek gods. The background isn’t anything to look at, and the symbols are merely above average.

The different types of free spins and jackpots do offer some redeeming qualities. Even still, you’ll probably only like this game if you really appreciate Greek mythology or are a Playtech fan.

PLAY AGE OF THE GODS FOR REAL HERE

MORE AGE OF THE GODS CASINOS