Launched in August 2017, Sticky Bandits is one of Quickspin’s biggest hits of all time. That said, it’s no surprise that Quickspin is now working on Sticky Bandits 2 slot.

Not much will change in terms of the theme. The sequel will also take players to the Wild West, where they can form winning combinations with deadly gunslingers. However, the features have been upgraded to allow for even bigger wins.

Sticky Bandits 2 is due out on August 13, 2019. Let’s preview this game ahead of its release date and discuss what it has to offer.

Quickspin has been fairly quiet on the details surrounding this game. Nevertheless, they’ve provided a few tidbits on what to expect.

First off, this will be a standard five-reel slot with a 5x3 grid. Assuming you’re a fan of the traditional five-reel setup, then you’ll appreciate this aspect.

Sticky Bandits 2 will again focus on the bandits, rather than the good guys. This concept was interesting in the previous game, making it no surprise that Quickspin brought it back.

We’re not 100 percent sure on what to expect regarding the betting options. The first Sticky Bandits featured a total betting range from €0.15 to €90. The minimum wager will probably be within €0.15 and €0.30, like other slots from this developer. 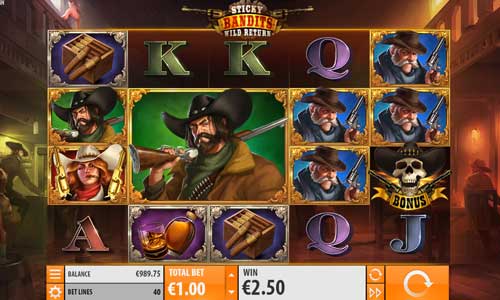 Colossal Symbols – The original slot featured large symbols that took up a 3x2 grid. Sticky Bandits 2 will present bandits in even larger form as “colossal symbols,” which consist of 3x3 icons.

Free Spins – This game will offer free spins with a win multiplier. You’ll have a chance to earn prizes worth hundreds or even thousands times more than your bet size.

High RTP – The return to player (RTP) for this slot will be 96.58%. This figure is quite high when compared to the industry.

Final Thoughts on Mercy of the Gods Slot

Not all Wild West-themed slots are winners. In fact, they can be downright cliché due to the large volume of them. But like its predecessor, Sticky Bandits 2 should differentiate itself from the pack with great graphics and design.

The features are solid, although nothing spectacular. We’d like to see what Sticky Bandits 2 could do with a second-screen bonus, given its impressive visuals.

You can play Sticky Bandits 2 online slot for fun when its released, or play other Quickspin slots.

Play Demo
Play Mercy of the Gods at NetEnt casinos